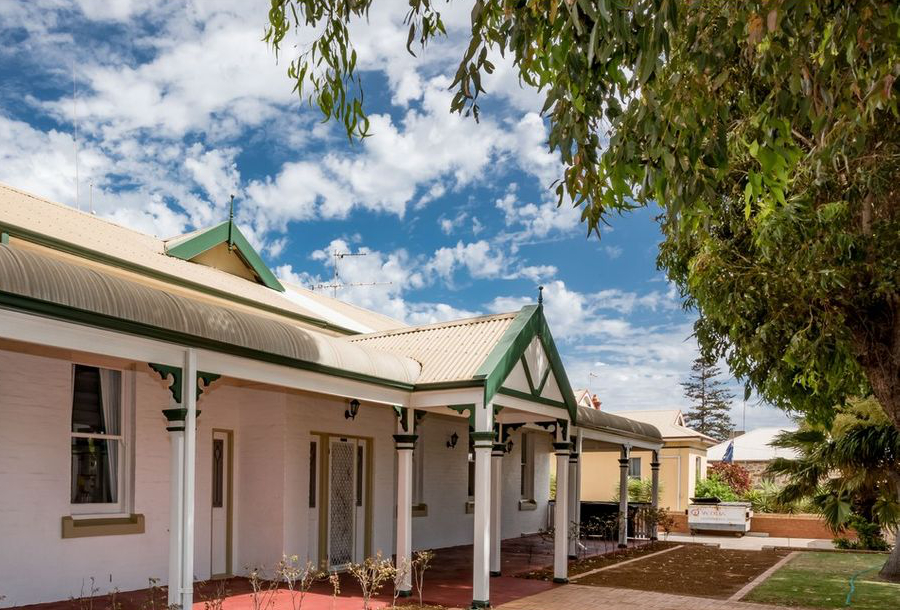 Devonshire Tea on June 19th proved to be as popular as ever. Our thanks to Maureen who hosted the afternoon. Unfortunately there will be no Tea this month.

NO SOCIALCOMMITTEE NEWS THIS MONTH

A WARM WELCOME to new residents Ray and Lyn. We wish them a long and happy association with the Village.

CONGRATULATIONS  to all those celebrating Birthdays and Anniversaries this month.

GETTING TO KNOW YOUR NEIGHBOURS

I was born in Geraldton to Grace and Edgar Patten.  I had 4 brothers Roy, John, Michael and Donny and one sister Valerie.  I did my schooling at Stella Maris College and after I left school I worked in Coles in Marine Terrace.

In my younger days I played Netball and Basketball and was a Marching Girl. (remember those sexy short skirts and long white boots?)

I married Ivan in 1960 and then moved to Mingenew where we had three farms. Ivan and I had three children Debbie, Michelle and John.

Ivan was President of the Mingenew Shire for 19 years. When he retired our daughter Michelle took over as President, then our grandson Justin joined the Shire making three consecutive generations of the family serving that Shire.

In 2006 we sold our farms and retired to Dongara.  We travelled to New Zealand to South Africa and then in our caravan we travelled all over Australia until Ivan got sick. He passed away four years ago,

I found our home in Dongara too big for me then so I moved to Geraldton and Harbour Pines where I hope to spend the rest of my life. I have 7 grandchildren and 10 great grandchildren.

A chance meeting in May ’67 between my then husband David and some Aussies at a service station in Torquay (UK) resulted in me and the whole family coming to Australia in July of that year.   There was very little work for a bricklayer at that time in Torquay but plenty of work in WA  so our enquiry to West Australia house  saw us very soon on our way to WA.

At the railway station at Torquay my Uncle and Aunt Maurice and Molly made a film of our departure for London. Unbeknown to us they had then quickly piled into their car and headed for Heathrow airport and so it was a shock to see them there along with my mother and several other relatives and friends to see us off.

Our flight to Perth was a fairly lengthy one compared to these days as the planes were smaller and slower but we finally landed at Perth airport on the 5th July and were taken to Point Walter Hostel. I hated the place.  Fortunately within a few days David had a job with Geoff Crothers from the Geraldton Brick Works and the family of me, David, Nick, Jackie, Andrew, Martyn and Vivien moved to Geraldton. We  travelled to Geraldton by train; an overnight journey. We were met at the station by Geoff and moved into his mother’s beach cottage at Point Moore. About a week later David went to Tom Price to work. There was a boom in  building in the mining towns then and later he went to Port Hedland.

Being left on my own with 5 young children overwhelmed me and I cried and cried for one day but after that I never looked back.  We were only in the beach cottage a couple of weeks when by good luck we got a new four bed roomed SHC house in Utakarra. Our street was mainly Poms and Scots. The first three children went to Rangeway School which in those days was mainly migrant children and where I got a job and worked for 23 years.

Eventually David and I were divorced and later I met George.(George and I were together until he passed away in 2014)

When I retired from work I volunteered at Geraldton Red Cross; at one time I was manager of the shop in Lester Avenue. I was also Secretary. Treasurer and eventually President of the Geraldton Red Cross Unit. After 10years I was awarded a Long Service Medal, after 20 years a gold bar (not real gold). I am also very proud of my Service Medal and still work in the Red Cross Shop.  My children all married Australians and I have 12 grandchildren, six of each and 4 great grandchildren with another due.

An old lady was standing at the railing of a cruise ship (remember them?) holding her hat on tight so that it would not blow off in the wind.

A gentleman approached her and said “Pardon me, madam. I do not intend to be forward, but did you know that your dress is blowing up in this high wind”

“But madam, you are not wearing anything under your dress and your privates are exposed”! Said the gentleman in earnest,

The woman looked down, then back up at the man and replied.

“Sir, anything you see down there is 85 years old. I just bought this hat yesterday”.

And then there’s a very rich old lady…held a tea party for her rich and influential friends.     She ate more cucumber sandwiches than she should have. During one of those deathly silent moments that can happen at any party a colossal breaking of wind came from the hostess’s direction. Never one to be easily embarrassed she quickly said to the butler “James, stop that immediately”. The butler turned and said “certainly madam, which way did it go?”

The George Award. Honour Board has disappeared from the Hall. It honoured Terry and Peter for their great efforts over the years keeping our roses and annuals looking so good.   It disappeared in January. Latest advice is that it has gone to Perth for more names to be added.   Who would you nominate as a great worker for our Village?